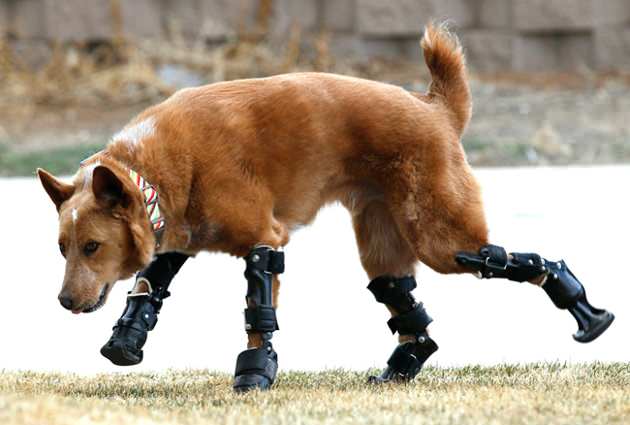 Tortured, shot at, or left to die, these brave pups each got a new lease on life with the help of artificial limbs

When Naki’o was a puppy, he was found, along with his litter mates and dead mother, abandoned in a foreclosed home in Nebraska. Naki’o was literally frozen into a puddle on the floor, and had to have all four of his paws and part of his tail amputated as a result. A Colorado Springs veterinary assistant named Christine Pace got wind of the dog’s woeful story and was so taken that she adopted the severely handicapped puppy. At first, Naki’o was able get around on his stumps, but as he grew, his weight limited his activity. Pace raised enough money to get him outfitted with prosthetic limbs for his back legs, which suffered the worse damage. Seeing that the playful pup managed so well on his bionic paws, Martin and Amy Kaufman of Orthopets created a pair of front-leg prosthesis as well. (You can watch a short documentary on his inspirational little life — but beware: You will cry.) (REUTERS/Rick Wilking) 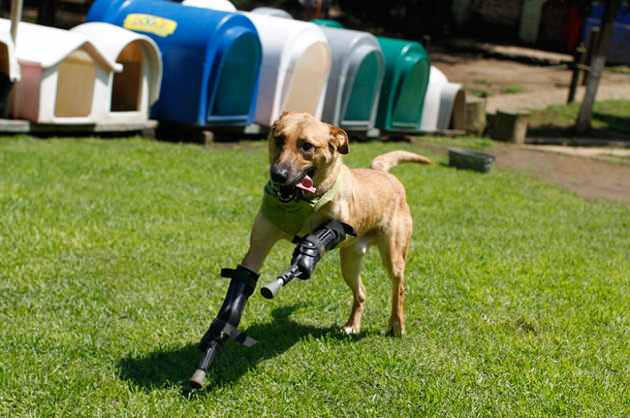 Pay de Limon. (Reuters)
In 2011, Pay de Limon was reportedly the victim of a Mexican drug gang assault. It’s believed that Mexico City gang members used the Belgian shepherd mix — whose name means lemon pie in English — as practice for other gruesome crimes. They reportedly cut off his two front paws to test out intimidation tactics they would later use on human hands. The dog was left in the trash to die, and a passerby heard his cries and took him to Milagros Caninos, a local sanctuary for abused animals. The staff nursed Pay de Limon back to health and raised more than $6,000 through donations to pay for two front-leg prosthetic limbs. He’s now accustomed to his new legs and can be seen happily trotting around the sanctuary like any other dog. (REUTERS/Tomas Bravo) 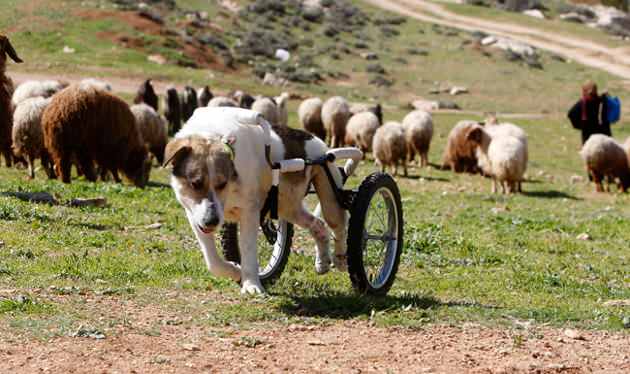 Abayed. (Reuters)
Abayed was once a working sheepdog in Jordan. But in 2011, a stranger, mistaking him for a stray, shot Abayed and paralyzed his hind legs. His owner found the howling dog and took him to a local animal shelter, where the medics said it was clear the dog had a will to live. Instead of putting him down, the shelter took the handicapped dog in as their own and eventually outfitted him with a pair of wheeled legs. The harness gives the former shepherding dog the freedom to roam the shelter’s grounds, wrangling the occasional rogue sheep or goat just for the fun of it. (IMAGE: REUTERS/Ali Jarekji)