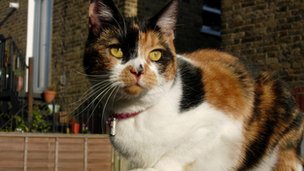 The Welsh government has rejected calls to relax the ban on electric shock collars for cats and dogs so pet owners can use so-called invisible fences.

Ministers say they see no reason to change the law after a petition to the Welsh assembly.

The devices automatically shock animals through their collars if they wander too far from home.

Electric shock collars have been illegal in Wales since 2010 and anyone using them can be fined £20,000 or jailed for up six months.

The ban also applies to what are known as invisible or containment fences.

They deliver a shock through the pet’s collar if it crosses a boundary, such as a wire buried at the edge of a garden.

A petition was handed in at the Senedd in January saying the law should be changed so pet owners can install the fences at home.

However, in a letter to the assembly’s petitions committee, a minister says the regulations were made because of the “physical and mental harm that could occur with the use of devices such as ‘invisible’ electric fences”.

Former Environment Minister John Griffiths, who has since been moved in a Cabinet reshuffle, wrote: “An electric shock is an electric shock whether caused by a remote or an underground circuit.”

He said regulations were reviewed periodically to make sure they are fit for purpose.

“We will also review if there has been a change in the science of the use of these collars.

“So far, no significant proposals or change has been seen to warrant an amendment or reversal of this legislation.”

Mrs O’Connor, 52, said she supports the ban on electric shock collars which are sold as training devices.

But she said invisible fences were “harmless” and animals quickly learned to obey alarms which warn them they are about to be shocked.